Never thought I was going to write about the floppy disks in the year 2013. However as of now we still sell diskette pages every single month to our own big surprise. Not a lot but it does come to a good large handful of orders each month. 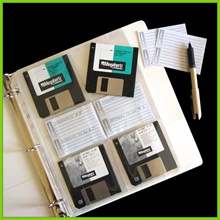 Floppy disks are still used today and from the feedback we received, it is not only old dusty government offices that use them but also private companies for use with technical equipment at laboratories, wood cutting machines, ATM machines when updating is needed as well as the airline industry. Used with older or timeless machinery that is very costly to exchange or simply don’t get worn out too fast as with airplanes.

For curiosity here BBC has compiled a list of 40 differentusage for floppy disks some more inventive than others with everything from icescraper to actual daily use.  You can read the article here.